Battling not to join the legion of the undead is PC Jake Rodwell. Nursing a zombie bite, he's straddling the chasm between life and death.

As the criminal underworld smells blood and moves in to rid itself of his scourge, Rodwell is ready to jump into the abyss. But Bannen's news about Rodwell's wife and daughter forces Rodwell into a battle to remain human and fight his way out of Bluff Cove. His mission to rescue his daughter from the clutches of a force even more destructive than the encroaching zombie apocalypse.

A KILLING SPREE AND SOME BLOODY ZOMBIES brings a flesh twist to the zombie genre, exploring the parallels between zombification and ageing, while ensuring readers hungry for a diet of flesh-ripping bites and head-turning decapitations get their fill. 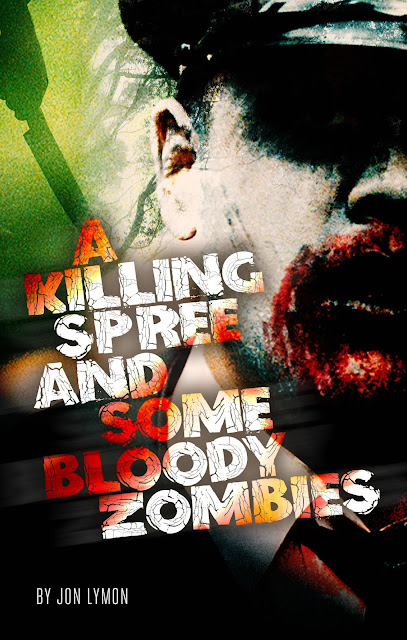 Will the world unite against a common enemy?

It's one of the questions asked in the novel A Big Bluff And Some Green Stuff, and no doubt many a story. It would be great to think that the presence of an outside force would cause traditional enmities to be forgotten, divisions to be healed, and the world to join together to defeat the invaders.

Sadly, much of what's happened since the invisible enemy of COVID-19 began to attack our race suggests the world isn't uniting against a common enemy on a scale we'd perhaps hoped. Old divisions remain, the blame game persists. Shame. That needs to change.

At least in A Big Bluff And Some Green Stuff, former enemies do bury the hatchet. Often in the skulls of vicious (and highly visible) zombie aliens intent on destroying the human race.

But that's another story.
No comments:

A flesh twist on the zombie genre.

Yes, I've given the old websites a facelift.
And not before time, I hear some cry.

Well, don't get upset, it's looking pretty good even if I do say so myself.

Check out what a new lick of paint can do here.
No comments:


This children's picture book can be purchased for a similar price to posh cat food and decent bird food from here.
No comments:

Annoying.I didn't buy this to like it! I bought it to see what best sellers read like. I didn't expect to zip through it in little over a week and actually enjoy it.Bugger. No, no, no. That wasn't the idea at all.I was feeling a bit smug at the start as I struggled with the opening. But brave old me persevered and when Jack Reacher finally turned up in the pages of his own book, all six-five, broad expanse of him, dressed like someone out of Miami Vice, I found it a rewarding experience. Although Tom Cruise playing him in the movie??? Let me check Reacher’s description again… Let’s move on to the writing, which flowed like blood into the drains around the town square where five seemingly innocent people get shot down by a sniper. Lee Child even has his own style quirk, starting some sentences midway through. I like writing quirks. And it's refreshing to find them floating around in the mainstream.The plot was tight, the writing convincingly American, given the writer hails from my side of the pond. It’s easy to see why the Reacher series is so popular, he’s a likeable outsider, well versed in the stealthy moves needed to evade the various nasties who want to ‘pop a cap in his bottom’ to use watered-down parlance.Yes, maybe the ending was over a little quickly, but that’s how Reacher likes to operate. Get in, do the business and then get out before any of the ladies he’s impressed try to tie him down.
No comments:

Keep The Love Of Real Music Alive For Children

It is not oft, nay, indeed it is very rare for this blog to directly ask for anything, other than perhaps consideration of this author's work.

Asking for money, and yes it a monetary request that follows, not for me, you understand. It's just not very English, is it. One stumbles a little when having to ask for a pound or two for some luncheon.

But, as someone who likes to help others, I have just written a Kickstarter pitch in which a very talented piano teacher is seeking funding to buy a Steinway piano upon which to teach his pupils.

Not being a pianist myself, although I can strum the guitar, I can imagine the awe and excitement children would feel when given the chance to learn on what clearly is such a wonderful instrument.

So if you, my reader, feel strongly about giving children the chance to learn piano on the best available instrument, please consider lending your fiscal backing to this campaign by clicking this link.

The piano teacher is offering some pretty good rewards for those who support him.
So help him aim big, aim high, and get those children off their iPads and onto a smart Steinway.
No comments:

Rodwell is back. And in bloody trouble/

A UNIQUE HAUNTING. AN OUTLANDISH CLIMAX.

A CHILLING THRILLER WITH A MIND-WARPING TWIST

200 YEARS AFTER THE GOLD RUSH, ANOTHER VALUABLE DISCOVERY SENDS THE WORLD INTO A FRENZY